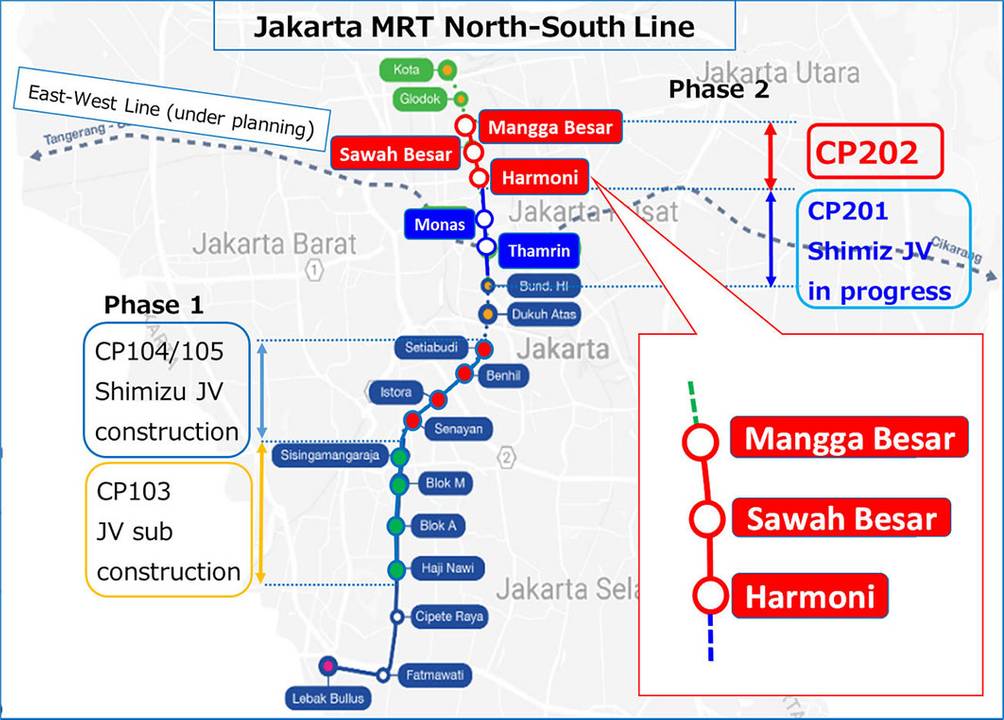 Jakarta MRT is Indonesia’s first urban high-speed railway incorporating a metro system, and the 15.7-km-long first phase of the project between Central Jakarta and South Jakarta commenced its operation in March 2019. The civil and building work for the Phase 1 comprised six design-and-build contract packages, with Shimizu responsible for three of them, two as a JV lead company and one as a JV member.

Phase 2 of the project will construct a 6.0-km rail line, extending from Bundaran HI Station at the northern end of the already-operational section up to the Kota district in northern Jakarta, where the seven new stations will be built. The construction work is divided into three contract packages, of which the CP201 – with a length of 2,676 m – from Bundaran HI Station to Harmoni Station was awarded to Shimizu-Adhi Karya JV in March 2020 as the first construction contract of the three packages.

The tunnelling work consists of four shield tunnels connecting the stations (two sections for inbound and outbound respectively, with each bound’s total tunnel length of 1,184 m; a finished inner diameter of 6.05 m), with a length of 394 m between Harmoni-Sawah Besar and a length of 790 m between Sawah Besar-Mangga Besar. The construction period is approximately 89 months starting from July 2022. The Phase 2 is scheduled to begin its operation in 2029.

According to Shimizu, in the CP202 contract package, large-scale underground stations will be built by the cut-and-cover method under a trunk road with extremely heavy traffic. Construction activities will be carried out while diverting the traffic lanes various times, and it will also be necessary to partially cover the canal that runs through the centre of the trunk road.

In addition, there are many buildings and underground pipes in proximity, “making this a highly challenging urban civil engineering project requiring a construction plan with careful consideration of the impact on the surrounding areas,” said the contractor.

Shimizu pointed out that “Indonesia’s rapid economic growth has made the expansion of transportation infrastructure and environmental considerations a key issue for future development, and there is a need to improve the public transportation. We will continue to contribute to infrastructure development in Indonesia, focusing on large-scale construction projects where we can make the most of our technical capabilities.”