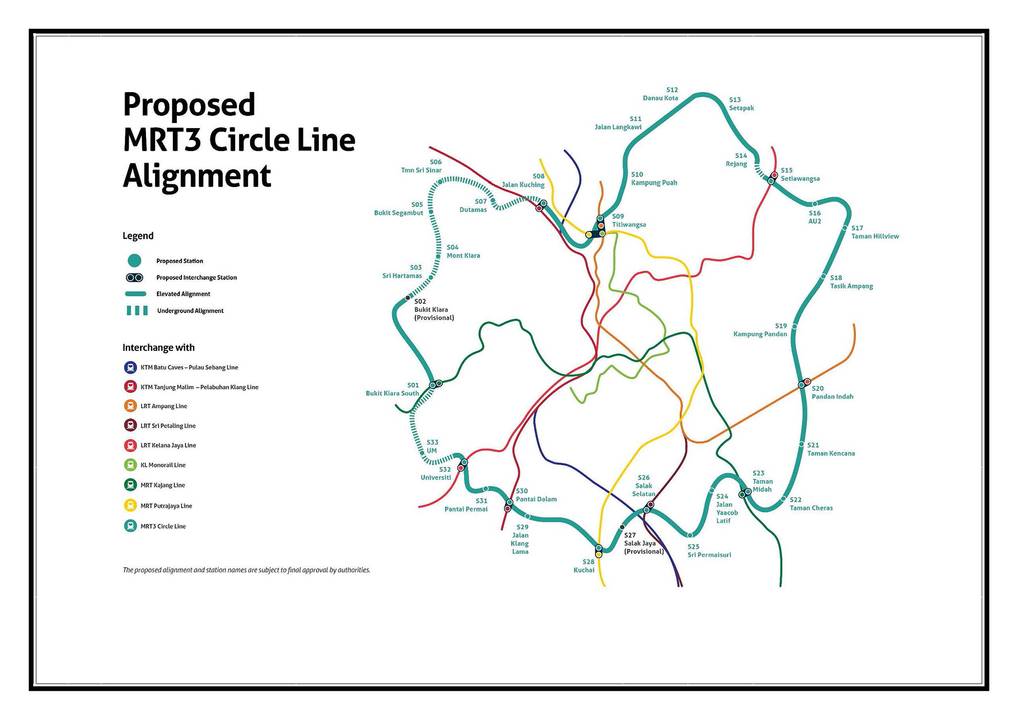 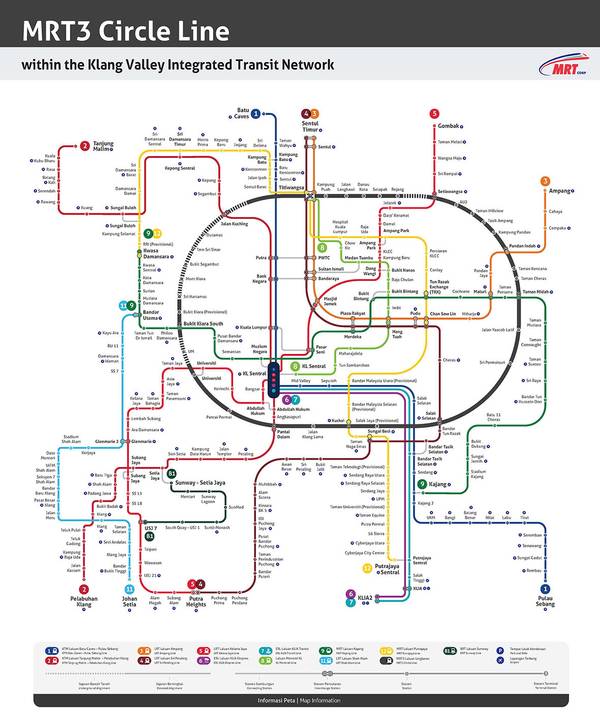 The new MRT3 Circle Line (in black) will be part of the Klang Valley integrated transit network.
MalaysiarailwayMRT Corp
Views: 4861

Mass Rapid Transit Corporation Sdn Bhd (MRT Corp) has announced that Phase 1 of the Mass Rapid Transit 3 (MRT3) Circle Line Project will be operational in 2028, with full operations scheduled for 2030. This new transit system in Kuala Lumpur – for which MRT Corp is the developer and asset owner – was recently given the approval to proceed by the Malaysian government.

“The tender will be separated into five main packages, and it will be floated from May 2022 onwards,” said Malaysia’s Transport Minister Datuk Seri Ir Dr Wee Ka Siong. “The five main packages are for two turnkey contractors for elevated works, one turnkey contractor for underground works, one for integrated rail systems, and one project management consultant to work alongside MRT Corp as the project developer.

“The government will finance the project, with the private sector funding some upfront costs. The details of the funding scheme differ from one package to another.”

Dr Wee pointed out that MRT3 Circle Line is the “critical last piece to complete the Kuala Lumpur urban rail network. This complete transit system will further encourage public transport usage. The Circle Line will be connected to existing MRT, LRT, KTM, and Monorail lines through 10 interchange stations. One of the key interchanges is Titiwangsa, which will be a multi-modal hub integrating four rail lines and a city bus hub.

“A complete transit network will enable the government to introduce more measures, such as vehicle and environmental fee, to reduce congestion and drive carbon emission down.”

Datuk Mohd Zarif Hashim, CEO of MRT Corp, added, “This was the result of various studies and engagements over the past year, following the government’s approval for MRT Corp to carry out technical studies in April last year.”

Last year, MRT Corp shared several insights on how MRT3 would be designed. “Our approach now is holistic and consistent with those design principles; alignment that delivers multiple benefits, high-value creation to the economy, utilisation of optimal cost and funding mechanism, and driving long lasting residual value,” explained Mr Hashim.

“Anchored by these design principles, the MRT3 alignment will include connectivity to underserved areas of the city and a multi-modal transit hub will be established. In its implementation, the project intends to scale up capabilities of Malaysian companies and talents in order to compete beyond our shores. As we progress with the project, we will conduct a series of briefings to share more details on the MRT3 blueprint.”

The new MRT3 Circle Line will be around 51 km and have a circular alignment running along the perimeter of Kuala Lumpur city. The proposed alignment comprises 40 km of elevated tracks and 11 km of underground tunnels. It will include 31 stations, 10 of which will be interchange stations with the eight existing rail lines in the Klang Valley.

According to MRT Corp, the construction cost of MRT3 Circle Line is estimated to be similar to MRT Putrajaya Line at around RM31 billion. “The actual construction cost will only be known after the open tender exercise is completed,” said Mr Hashim.