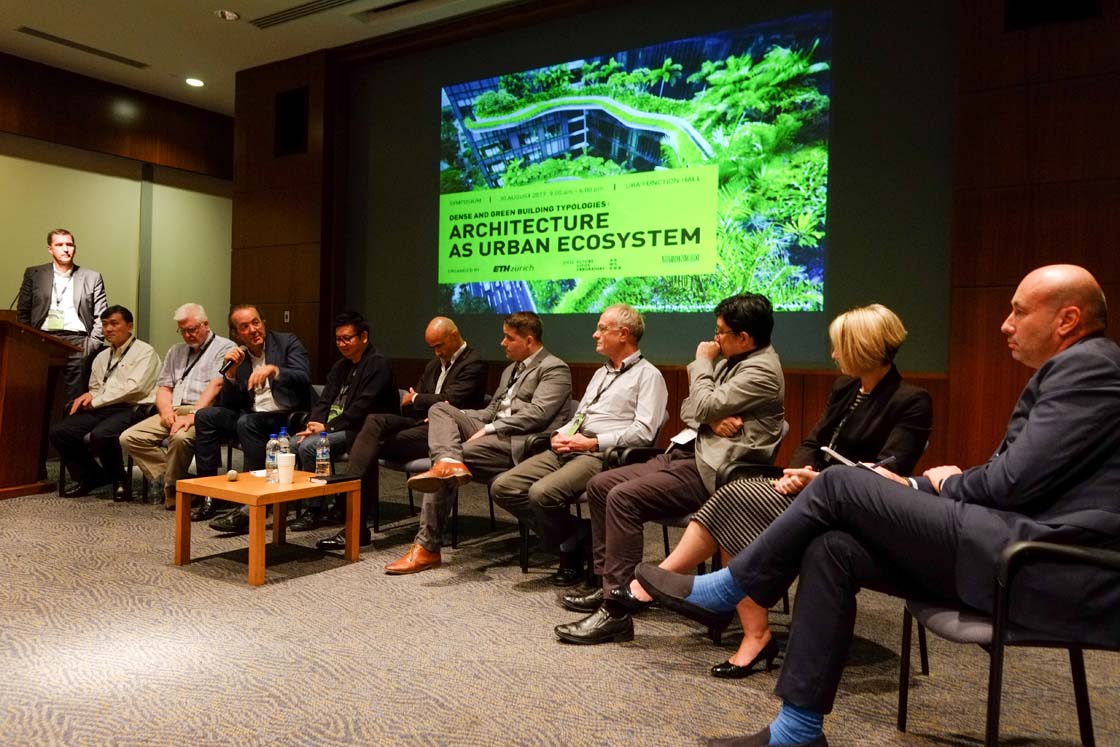 Singapore – Contemporary architecture and urban design practice in Singapore and beyond is increasingly integrated with green spaces in buildings, producing new typologies for high-density contexts that include public space, extensive sky terraces, sky bridges, vertical parks, roof gardens, and other ‘green’ components. Combinations of these, often applied to mixes of residential, civic and commercial programmes, conjoin at times to produce ‘vertical cities’, where the building becomes part of larger urban ecosystems such as parks, gardens and river networks.

In this context, the first Dense and Green Building Typologies Symposium, themed ‘Architecture as Urban Ecosystem’ on 30 August 2017 was organised to address the seemingly contradictory, but in fact mutually dependent and synergistic notions of density and sustainability.

The symposium was conceived by the ‘Dense and Green Building Typologies’ research group at Future Cities Laboratory (FCL) at the Singapore-ETH Centre. The research group is led by Prof Dr Thomas Schroepfer from SUTD, and Prof Dr Sacha Menz from ETH Zurich. It is precisely the need to take a holistic approach in studying green buildings – considering the spectrum of design, economic, social, and ecological benefits – that inspired Prof Schroepfer and Prof Menz to bring together multiple stakeholders and their perspectives.

At the symposium hosted by the Urban Redevelopment Authority (URA), distinguished speakers representing government agencies, architects and landscape architects, and real estate sector converged on the topic of how dense and green building typologies can contribute to the urban ecosystem and to developing compact yet highly liveable cities.

Mr Khoo Teng Chye, executive director of the Centre for Liveable Cities, recognised that a city is essentially a “man-made construct”, and many speakers agreed with the need to “reclaim” nature that is lost, by integrating the built environment with nature or to “weave” the man-made among nature or vice versa. Dr Cheong Koon Hean, CEO of the Housing Development Board, discussed the approach of biophilic design in new public housing towns (HBD towns), which was embraced by Tan Shao Yen, CEO of CPG Consultants.

Beyond biophilic design, Dr Ken Yeang of T.R. Hamzah & Yeang proposed the integration of nature with the built environment from the point of view of bio-integration, that is learning from, or emulating the natural environment. He proposed that we should “not just integrate the building, but integrate the hinterland, so that nature becomes whole again”. Prof Christophe Girot, coprincipal investigator of Ecosystem Services for Urban Landscape research project at FCL agreed that the context of green developments must be carefully considered. He called for more detailed studies of contextual compatibility – be it in ecological, cultural, social, or general landscape – prior to the implementation of such projects.

Prof Peter Edwards, principal investigator of Ecosystem Services for Urban Landscape research project at FCL, likened a city to an ecosystem. Since the built environment is designed but an ecosystem is self-organising, viewing the city as an ecosystem will ensure that it is more resilient against negative effects such as the urban heat island. He discussed how science could help quantify the ecosystem services provided by urban greenery and could inform planning in order to maximise the provision of such services.

Mr Yeo Meng Tong, senior director of the National Parks Board marked the shift not only from ‘Garden City’ to ‘City in a Garden’, but also that of land planning to spatial planning in land scarce Singapore, so as to consider the vertical space.

Henry Steed, director of ICN Design International agreed that “landscaping must be done on structures from now on, there is just not enough land”. Ryan Shubin, associate and landscape architect of Ramboll Studio Dreiseitl, also spoke of the concept of “stacking” to allow more space for community gardens and greenery.

On scalability, aligned with the notion that Singapore is often described as a living lab for urban solutions, Richard Hassell from WOHA suggests that new sustainable cities can be developed by prototyping sustainable projects. Manuel Der Hagopian, partner and co-founder of group8asia also shared how Punggol Waterway Terraces could be a blueprint for 21st century sustainable mass housing that takes into consideration community identity.

Speakers from the real estate sector brought in the perspective of demand for green buildings and how that could shape future development trends and pricing. Dr Megan Walters, international director and head of research of JLL Asia Pacific, discussed whether greenery in commercial buildings enhances returns for investors. She suggested that while it may not necessarily increase rental, such enhancement in the environment promotes the “stickiness” effect such that tenants are more likely to stay for the long haul. Mr Nicholas Mak, executive director of SLP International Property Consultants provided insights on the homebuyers’ perception of ‘green’ features in housing developments and suggested that green buildings may have become the “new standard” expected by homebuyers of today.

Interestingly, speakers from different sectors pointed to one necessary ingredient in making the built environment more green and sustainable. Henry Steed of ICN Design International believes that a future green city can only be achieved when there is universal buy-in by stakeholders who embrace innovative and useful policies to stimulate new design thinking, combined with technology. Representatives from government agencies, industry and the FCL, who had been working closely with various stakeholders, agree that dialogue and collaboration must continue and be further strengthened.

At the event, FCL marked a milestone with the launch of the book ‘Future Cities Laboratory Indicia 1’. The first in a planned series, this book reports on FCL’s ambitious mission to shape sustainable future cities through science, by design, in place. It offers a global perspective on cities from the vantage point of Asia. This view has particular significance today as the fortunes of Asia, the world’s most populous and rapidly urbanising continent, will also delineate the prospects of the planet.