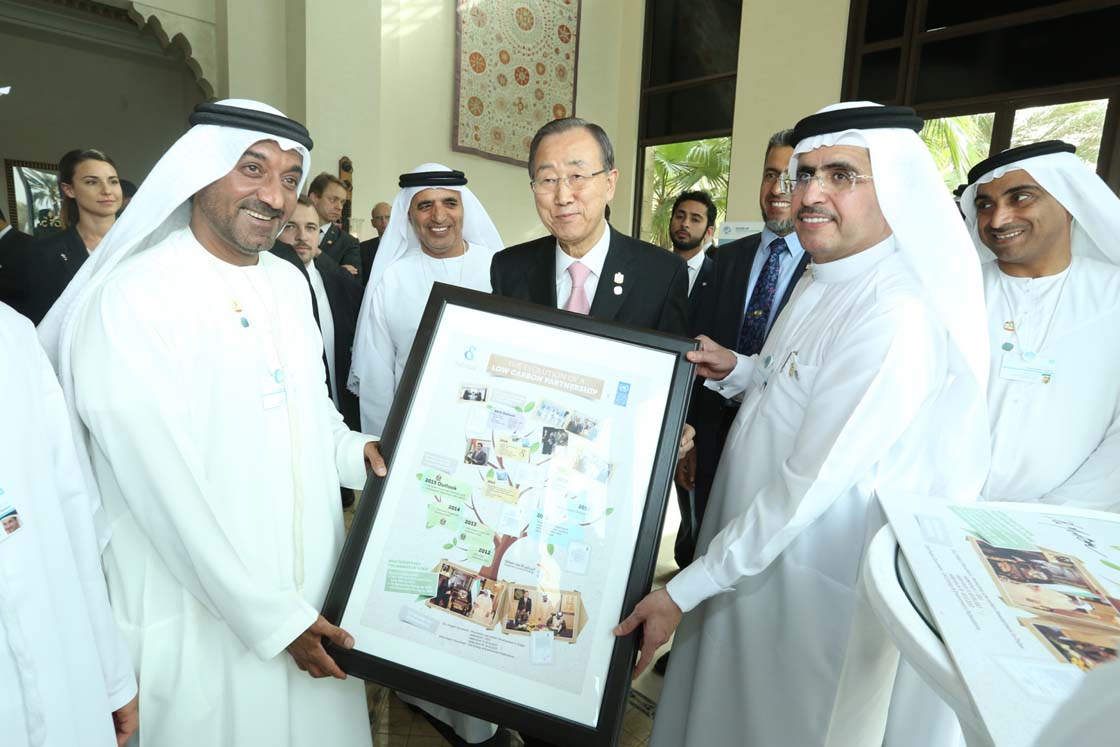 Dubai, UAE – HH Sheikh Ahmed bin Saeed Al Maktoum, Chairman of the Dubai Supreme Council of Energy, met Ban Ki-moon, Secretary-General of the United Nations during the Government Summit, held in Dubai from 9-11 February, to review the progress of Dubai’s Low Carbon Development. The meeting was attended by HE Saeed Mohammed Al Tayer, Vice Chairman of The Supreme Council of Energy and MD & CEO of Dubai Electricity and Water Authority (DEWA). The Vice Chairman briefed the UN delegation about the programme, attended by staff from the Supreme Council and the Dubai Carbon Centre of Excellence (Dubai Carbon).

The Supreme Council of Energy and the United Nations Development Programme (UNDP) started an integrated collaboration in 2011, when an agreement launching Dubai Carbon was signed by HH Sheikh Ahmed bin Saeed Al Maktoum in the presence of HH Sheikh Mohammed bin Rashid Al Maktoum, Vice President and Prime Minister of the UAE and Ruler of Dubai, and the Secretary General, amongst numerous dignitaries. The organisations jointly founded Dubai Carbon as a purpose vehicle to transform Dubai into a low-carbon economy and be a think tank and advisory service. Dubai Carbon facilitates knowledge transfer and capacity building throughout the UAE and the region.

“Dubai Carbon, under the umbrella of the Dubai Supreme Council of Energy, has deployed a strategy to reduce carbon emissions that is the first of its kind in the region. It supports the UAE Vision 2021, to transform the UAE into be one of the best countries in the world by 2021. The strategy also supports the national long-term Green Economy for Sustainable Development initiative launched by HH Sheikh Mohammed bin Rashid Al Maktoum, Vice President and Prime Minister of the UAE and Ruler of Dubai to enhance competitiveness and economic sustainability of the UAE, and make it a global role model in sustainability and green initiatives. Dubai Carbon’s activities complement the Dubai Strategic Plan 2021, through the support and maintenance of Dubai's leading position at the regional level and its competitiveness at the global level, as well as Dubai Integrated Energy Strategy to reduce energy consumption by 30 percent by 2030,” said Al Tayer.

“Dubai Carbon is at the forefront of reducing carbon emissions locally and regionally. Its core business is low-carbon advisory aimed at creating award-winning carbon management initiatives in the private and public sector, renewable energy projects, trainings and carbon credit registration under the Clean Development Mechanism (CDM). Through carbon foot- printing and energy audits, Dubai Carbon helps organisations map out their emissions and identify opportunities for emission reductions, which result in cost efficiencies and increased revenues,” added Al Tayer. HE Ban Ki-moon stated: “The Dubai Carbon Centre of Excellence has come a long way since its establishment. It gives me great pride to see how it has developed into an influential and integral part of the low-carbon and green economy movement in the UAE since 2011. Dubai Carbon is a prime example of a fit-for-purpose Public Private Partnership integrating competencies of different UN agencies under the leadership of UNDP (United Nations Development Programme) and in close cooperation with the Dubai Supreme Council of Energy.”

“Through our partnership with the UAE Government, our innovative work with DCCE and young Carbon Ambassadors, we at UNDP trust that innovative solutions towards lowering carbon emissions, sustainable use of natural resources and greening the economy will greatly contribute to global agenda of climate change and sustainable development goals,” said Sayed Aqa, UN Resident Coordinator and UNDP Resident Representative.

During the briefing, the progress on the collaboration between the Supreme Council of Energy and the UNDP was evaluated, and who both expressed their willingness to extend their collaboration.