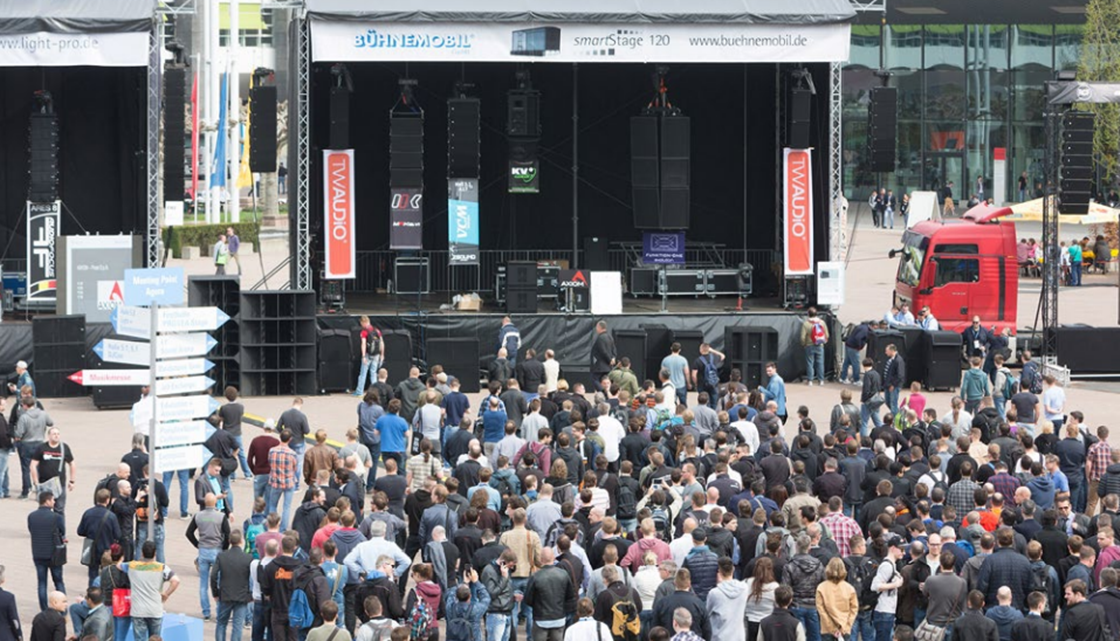 From 4 to 7 April 2017, the fair welcomed 45,100 visitors from 139 countries. 950 exhibitors from 39 countries presented their latest products for the fields of lighting, sound and stage engineering, broadcasting and production technology, systems integration and AV media technology.

“In many important international markets, demand for live entertainment has increased significantly, as has the number of elaborate corporate and customer events being held. Investments in modern event technology are being made all around the world and, as the international platform for the industry’s innovations, Prolight + Sound benefited from this positive business climate. Once again, the fair demonstrated how important it is for the individual segments of the event and media-technology sector to exhibit, network and exchange information together at the same time and place”, explains Michael Biwer, Group Show Director of the ‘Entertainment, Media & Creative Industries’ Business Unit of Messe Frankfurt Exhibition GmbH.

With 54 percent of visitors coming from outside Germany, Prolight + Sound was the global meeting place for the sector. After Germany, the leading visitor nations included the Netherlands, Italy, France, Belgium, China, the United Kingdom, Switzerland, Russia, Austria and Poland. 93 percent of visitors achieved their personal goals at the fair. Leading trade associations were also pleased with their results: “Following the comprehensive restructuring in 2016 and several subsequent improvements, the fair continues on its successful course. Some of our members have reported an increase in the number of international visitors to their exhibition stands this year. The fair has become an established networking venue for many associations from all over the world and is rightly known as the leading event for our sector”, said Randell Greenlee, Head of the Political and International Division of theGerman Entertainment Technology Association (VPLT).

Joachim König, President of the European Association of Event Centres (EVVC) summarised saying, “Once again, Prolight + Sound has shown that it is the foremost PROLIGHT + SOUND 2017 DEMONSTRATES ITS IMPORTANCE FOR THE SECTOR - HIGH LEVELS OF INTERNATIONALITY AND SATISFACTION meeting place for the lighting and sound sector. The synergistic effects are extremely valuable for the annual general meeting of the EVVC, which is held every two years during the fair in Frankfurt. In addition to the innovations to be seen at the fair itself, the ‘International Event Safety Conference’, which takes place within the framework of the fair, has developed over recent years into a very important professional-development platform for members of the technical staff of our member companies.”

Broad product spectrum and high levels of exhibitor satisfaction The exhibitors of Prolight + Sound 2017 demonstrated the innovativeness of the sector with numerous new product lines – including impressive lighting, water and pyro effects, 4K laser projectors, ultra HD displays, high-performance media servers and programmable show drones. As in the past, LED modules were an important growth segment at Prolight + Sound 2017. Manufacturers are banking not only on smaller pixel pitches and brilliant colour reproduction but also, to an increasing extent, on user friendliness, robustness and energy efficiency. Digital network protocols continue to gain in significance in the audio and broadcasting segments. Numerous Ethernet-compatible product lines that support the Dante industry standard or similar audioover-IP formats, from mixing desks and stage boxes, via loudspeakers and microphone systems, to conference solutions, were on show.