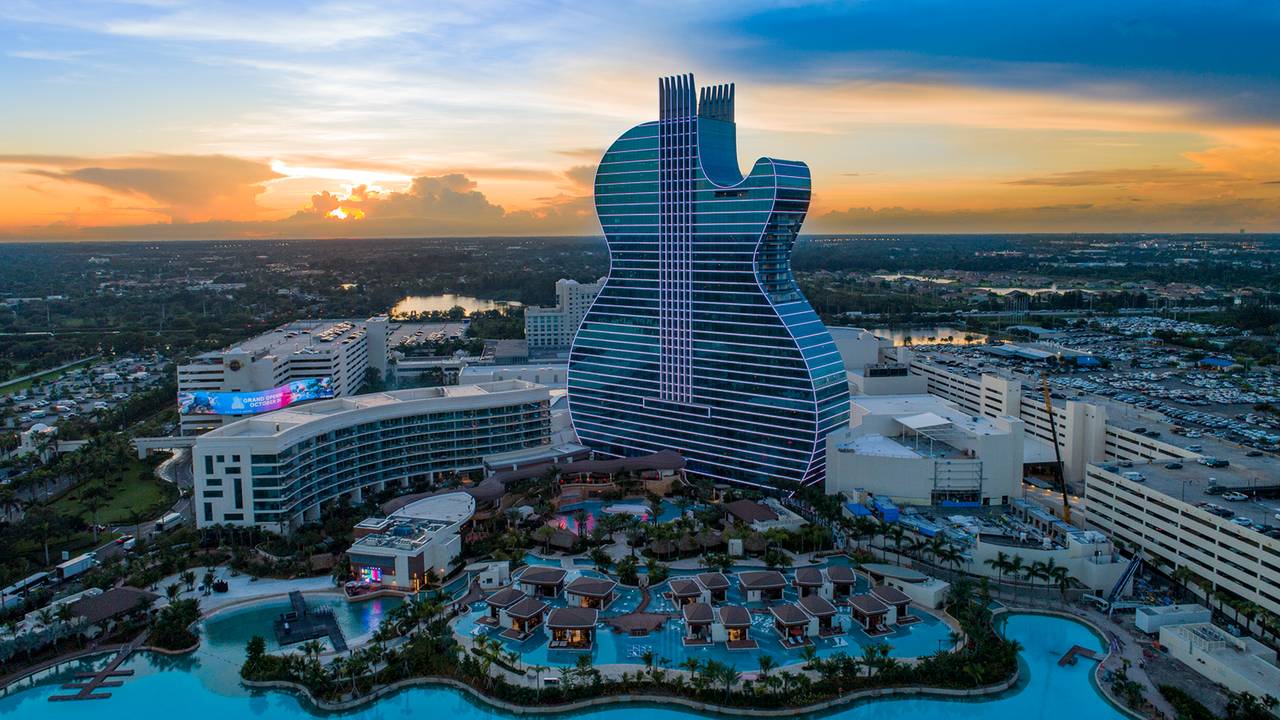 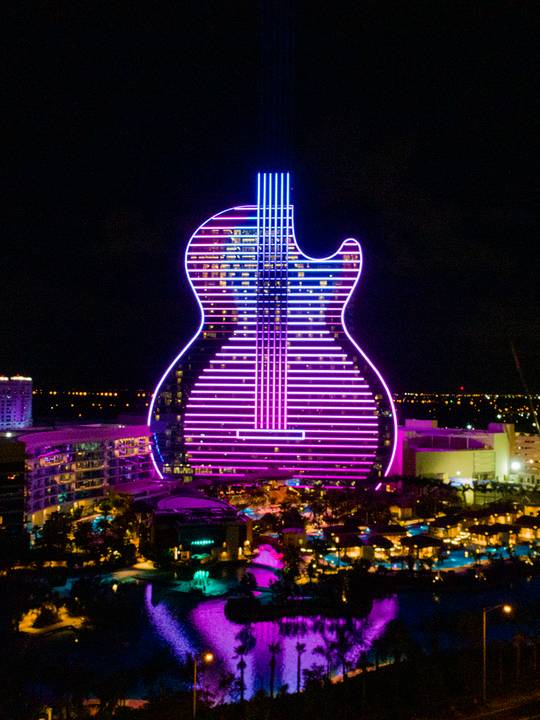 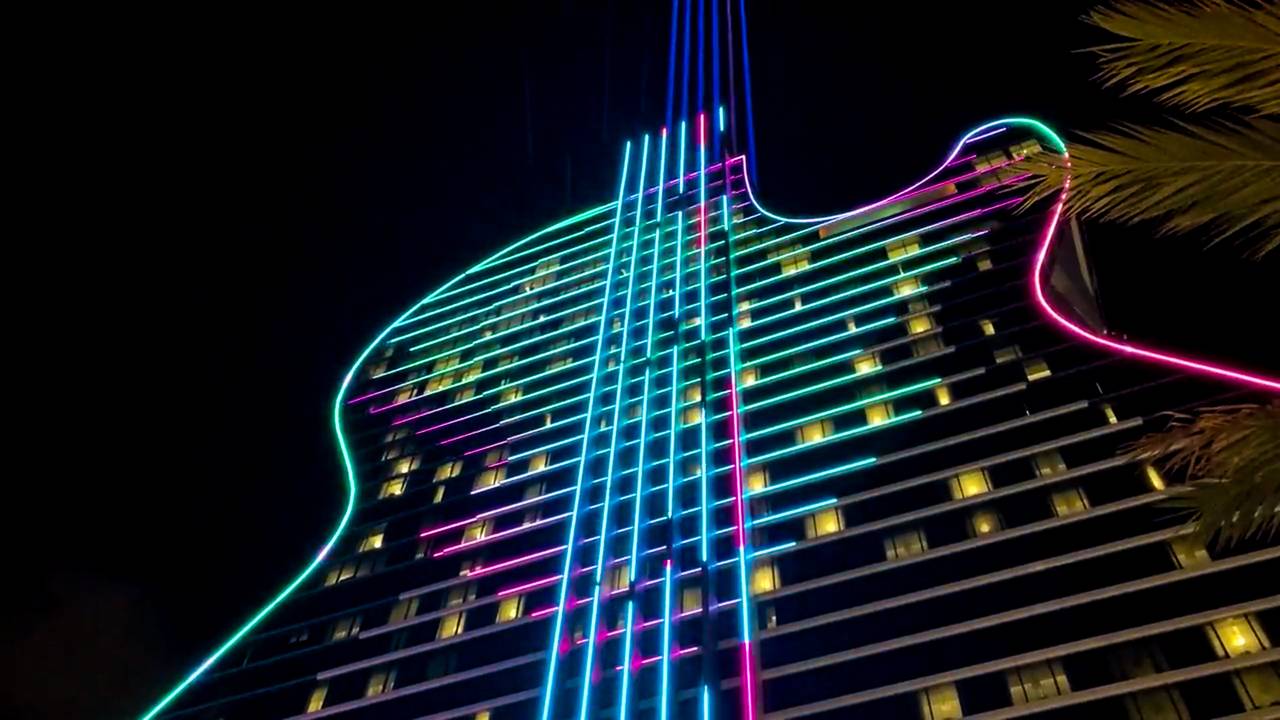 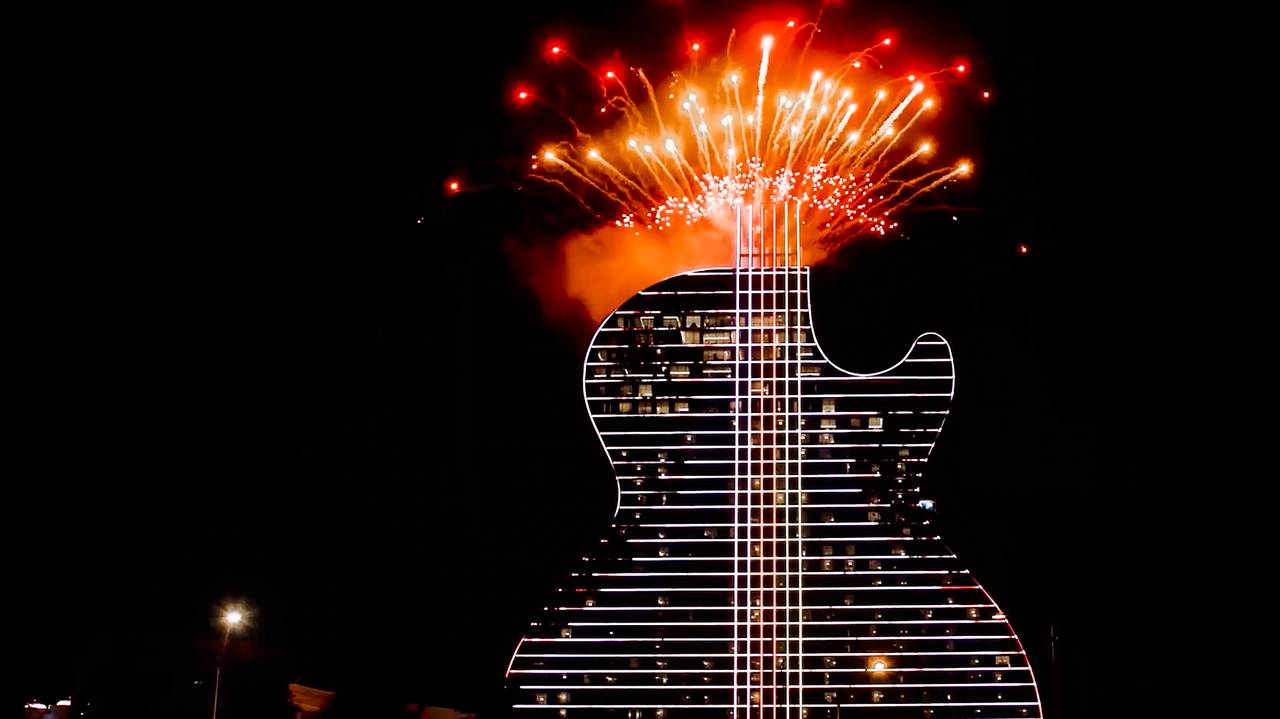 RealMotion™, the pioneering designer of content management and creation software and hardware, recently brought its expertise to the launch of the world’s first guitar-shaped hotel, the Seminole Hard Rock Hotel & Casino in Hollywood, Florida.

Powered by a single RealMotion 4 Karat Gold Series server, the entire facade of the 400-foot-tall, $1.5 billion hotel is now one of the world’s most unique digital sculptures, capable of presenting a multitude of dazzling visual effects and presentations that utilize 2.3 million LED lights, video mapping and lasers - a project that was managed, directed, engineered and installed by Boston-based custom fabricator DCL (Design Communications LTD).

“The front facade of the hotel is both a media system and a dynamic sculpture,” said Geoffrey Platt, Director of RealMotion. “Lined with LED products and power systems provided by SACO, the front will serve as a screen and stage to daily musical showcases. The shows will be a testament to how music has been instrumental in defining Hard Rock hotels, restaurants and entertainment properties around the world.”

At the hotel’s recent grand opening celebration, the capabilities of its LED facade were on full display, with generative and sound reactive content created by Float4 delivering hours of vibrant visuals unlike any other display system in the world. The event featured a grand reveal of what the guitar can do, establishing the guitar as the static architecture icon.

As the crowd ambiance built through the early evening, the official guitar SMASH experience marked the beginning of a custom drum sequence, triggering a bold guitar activation. The show then journeyed through different decades, musical styles and energies, presenting audio-driven dynamics, intricate line compositions, cascading waterfalls of light and energy as transitions, and a full 3D guitar effect, complete with lasers extending into the sky to represent guitar strings. Managing all of this content and pixel mapping for 2.3 million individual LEDs put the RealMotion server to the test.

“The 4 Karat server plays a huge role in the technical management of the show itself,” said Geoff Platt, Director of RealMotion. “We used ISAAC, an integrated scheduling and automation control platform created by Smart Monkeys, to develop a system to ingest content into the 4 Karat Server to manage and synchronize the millions of content elements of the show. RealMotion's reliability ensures that the Guitar Hotel's shows will run long-term. What DCL has put together is a huge feat in digital signage, architecture, and entertainment. We couldn't be prouder to have been brought onto this project, and to know that a 4 Karat RealMotion Server can manage a spectacle such as this."

The facade has five core elements that can each be used for specific effects. The Front & Back are the main sections on which dynamic content can be video mapped. The Outline delineates the edges of the guitar shape, and content plays with this aspect by hiding and revealing the guitar’s contours. The Sides enhance the illusion of depth for visual effects, while The Strings, which utilize lasers instead of LEDs, are used to show vertical motion and effects such as fountains, chord strums and string plucks. Lastly, The Spandrel Glass section is ideal for expanding content from the face and body to create the illusion of another level of content.

While the grand opening was indeed a major celebration, the full goal of this project was to enable a long-term digital sculpture installation that can display new content and themes as the owners’ desire.

“We needed a media server for a permanent architecture setting, that could be integrated into a larger network,” said Jeff Grantz, Director of Creative Technologies at DCL. “The 4 Karat server from RealMotion’s Gold series has a robust architecture setting and required minimum project-based customization. We’re well-informed of the server’s dexterity for generative content and knew it would be an intuitive tool to pass on to our client for when they begin to facilitate their own programming. As always, it’s a great experience to work with RealMotion and the RealMotion team.”

RealMotion took special care to build the content system in such a way that Hard Rock would be able to make relatively quick adjustments that could otherwise take hours of video rendering to complete. To achieve this, RealMotion used image sequencing instead of video, so that any changes would only require replacing or editing images within the sequence, eliminating the need for a new video file to be rendered.

Under DCL’s direction, Float4 also developed two additional content pieces. The “Sunset Ceremony” sets a festive tone for every evening with visual imagery of a scenic sunset and a guitar playing spirit with audio-reactive elements. The “Smooth” piece is a homage to the end of the classic rock era as it transitioned to contemporary music, based on the collaboration by Matchbox Twenty frontman Rob Thomas and Latin-Rock band Santana, and includes psychedelic artwork, a silhouette of a Latina dancer, ‘electric energy’ and ‘festive’ patterns, and creative transitions such as a river of light and flocking simulations. Ambient content plays when none of the major shows are scheduled, so there is always something to see.

To see it in person, it can be hard to believe that a single media server is running real-time generative content on a custom-shaped canvas with millions of pixels - that’s the power of RealMotion.
A video of the installation can be seen here: https://vimeo.com/369843539

Osram lights up the tallest building in Southeast Asia
May 29,2020
Zumtobel lights Scott Sports headquarters
May 18,2020